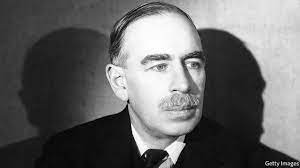 ohn Maynard Keynes was an English economist of enormous influence. For proof, look no further than the fact that Keynesian economics served as the standard macroeconomic model throughout the latter part of the Great Depression, the Second World War, and the post-war period. Furthermore, Keynesian economics remains very relevant in the present time because of its revised version called New Keynesian economics.

Background-wise, Keynes was born to an upper-middle-class family. His health was poor. However, Keynes nonetheless managed to excel in school, not least because of his parents, who were very supportive of their children. As such, he received a scholarship to Eton College and then a scholarship to King’s College, Cambridge, thus ensuring his place as a member of the British elite.

By the start of the First World War, Keynes had become a name of note in economics, so much so that the British government called upon him for his expertise and experience. He took on a number of responsibilities, with examples ranging from the acquisition of scarce currencies to the design of the terms of credit between Britain and its continental counterparts. Keynes’s successes made him a figure of sufficient influence to become involved in the Versailles peace conference. However, the conservatives in the ruling coalition that emerged from the 1918 U.K. general election were able to sideline him and the rest of the Treasury. Something that can be explained by Keynes’s desire for lower war reparations, which he believed would be bad for not just Germany but also the rest of the world.

However, Keynes is best remembered for the revolutionary change in economic thinking that happened during the Great Recession. Neoclassical economics said that the free market would automatically provide full employment so long as workers were flexible about their wages. However, Keynes and his supporters said that economic activity was determined by total spending while wages were rigid downwards. As a result, the economy wouldn’t necessarily return to full employment on its own, meaning that both fiscal and monetary policies had to be used to mitigate the worst of economic shocks.

Keynes’s ideas were laid out in a book called The General Theory of Employment, Interest, and Money, which remains very important in the field of economics. The leading western economies started implementing his ideas in the late 1930s, becoming more and more prominent after his death in 1946.

They took a hit because of stagflation in the 1970s. However, New Keynesian economics has since made a strong comeback, as shown by how they served as the theoretical basis for governmental intervention in the financial crisis of 2007 and 2008, as well as the COVID-19 crisis.